6 Lessons I Learned Setting Up a Street Food Stall 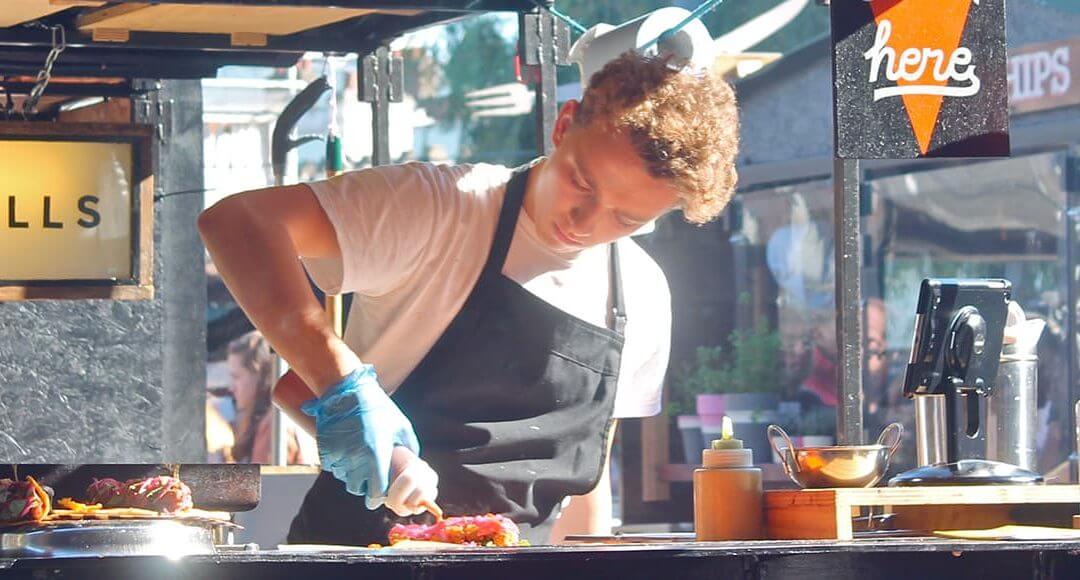 To anyone who has walked through a city centre at lunchtime on a weekday to the smell of burgers frying, halloumi grilling and queues of hungry people lining the streets, it’s clear that street food is enjoying a golden moment. According to the Santa Maria Foodservice’s Street Food Report, which looked into the popularity of street food in London, 50% of consumers surveyed at top street food locations in the capital are consuming food from street vendors at least once a week, with 20% going back to stalls as many as three times a week. So, what lessons can new vendors learn from those who’ve managed to open a street food stall with success?

Indian Street Kitchen Kolkati has taken the London street food scene by storm since co-founders Kate de Lord and Jack Hogarth first took it to the streets in 2016. The combination of a striking aesthetic, friendly service and beautifully fragrant North Indian recipes has won the Kati Roll stall numerous pop-up fixtures, a strong reputation on the circuit as well as many positive reviews on Trip Advisor.

We caught up with the company’s co-founder, Kate de Lord, who had a few nuggets of wisdom for up-and-coming street food vendors from everything she’s learned along the way.

1.    Firstly, inspiration can come from anywhere.

We set up Kolkati after a five-month trip around India, wanting to bring back the little known Kati Roll product back home to London. After we returned from our travels, I worked for a few months on other street food stalls. This gave me the confidence to believe it was something I could actually pursue. Our first market was about six months after we returned from India, and we fully launched two months after our test trade. Until that point, we were still tied to other jobs.

Every day is different, which is we exactly what we hoped for. General tasks involve organising stock, making chutneys and doing deliveries to our fixed site.

A lunch market day involves driving to storage, loading the van, driving to the market to set up our equipment and preparing food ready to sell. Like every self-employed person, we also have admin coming out of our ears!

Setting up our seven-days-a-week street food stall (at KERB Camden) has been our proudest moment to date. Getting everything organised in a very short time period was incredibly work-intensive. We had to build a usable kitchen space, sort deliveries, recruit and train staff. The whole operation has to be pretty slick because there is only one day in the whole year we don’t trade – Christmas day.

The best part about starting your own business and working for yourself is the sense of self-achievement and self-sufficiency. Creating something you’re proud of and independently making a living from it is the most incredible feeling.

With all the great feelings of achievement come the hard parts, too – for me these are stress, doubt and being able to separate work and leisure time. I also find managing people tough sometimes.

That’s my ultimate piece of advice to anyone thinking of starting a business of any kind. Take the bull by the horns; ask everyone as many questions as you can – get yourself out there and known. Don’t be too precious about being perfect straight away, because making connections and striving to learn along the way is much more important.

We’ve been in business for just over a year now, and a lot more has happened this year than we ever expected. Now we’re growing and we would love to pick up more everyday fixed sites where we can expand our menu and get a real return customer base going.

You can find Kolkati in London: every day at KERB Camden, Wednesdays at West India Quay and one Thursday a month at The Gherkin. For more information about Kolkati, including what’s on their menu and any upcoming events they’ll be at, keep up with them on Twitter: @Kolkati.

Inspired to start up your own food business or want to try running a street food stall? Check out our article on how to open a pop-up food stall, or browse the help centre for all the startup advice you need.