Christmas has historically been a festive time for us to celebrate with friends, family and colleagues. In the last 3 years, we have sat back and celebrated our own stories, and that of the businesses we have supported. This Christmas we decided to celebrate the thinking behind a very interesting company called Cheesy Christmas Jumpers. They saw a gap in the market in 2009 and are today known to be “Home of The LED lighted Christmas jumper, knitted jumpers and Fair Isle Christmas jumpers”.

A lot of you may have started a business already, or are thinking to start a business in 2014. Well, THIS story inspired our team with the way their family business bucked economic trends; and continually built on their existing business to evolve into what it is today. We hope it inspires you too…

We caught up with its founding owner Mark Everett, who shared its early beginnings: He is the son in this well-loved Father and Son Business based in Bradford. “The idea for the business really came about from us adapting our business model to the changing times…”

“We had a very successful eBay Shop in 2004. It was basically selling T-Shirts and was making us a fantastic income. Well, eBay changed its fees in 2006, and at the same time competition was rising. It became very difficult to make it work.” Rather than succumb to difficult times until it was no longer a viable business, Mark decided to expand the eBay store by adding Christmas jumpers.

Mark continues: “We experimented a lot. We decided to go by the trends that said jumpers HAD to be ugly and daft…we made our jumpers really outrageous. The cheesier the better!” By 2009, Cheesy Christmas Jumpers was a lot more profitable than the T-Shirts ever were, and thus what started as an eBay Store evolved into what you see on their website today. They expanded the product range every year and between September and October 2013, many of their unique designs were marked “sold out.”

Its 3 Claims To Fame 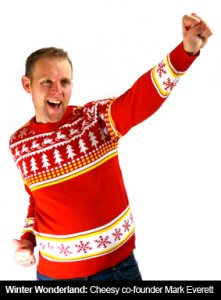 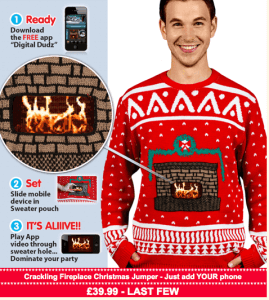 Although a largely online business, Cheesy Christmas Jumpers have appeared on many TV shows; and the jumpers worn by various celebrities featured in magazines. They have even won a place in The Independent’s 10 Best Christmas Jumpers List in 2013 with their Crackling Fireplace design: This roaring fire design involves downloading a free app to get a flickering flame video on your smartphone. Then you pop your mobile into the concealed pouch with a screen-sized hole.

There once again is the heart of what makes this a successful business: fun and hard work. His true goal is to bring fun and festivities to households by offering quality cheesy, ugly and novelty Christmas jumpers, that can be worn by men, women and children of all ages.

They participate in and hold many charity events, including ITV’s Text Santa 2012, and a recent Christmas Jumper Party, with ticket proceeds going to Charity.  The event was in Bradford and was completely sold out around the same time that several LED-jumpers displayed the SOLD OUT sign online.

His biggest advice to share with all Start-ups and small businesses?

“…In Design School, I was taught not to follow the normal trend, which I have always obeyed. I insist on finding a trend and then just making it bigger, more ridiculous. That and what my father has always taught me: Work hard and you’ll get what you put into it.”

And this is the best part: do you want to hear about working hard? At the end of our conversation with Mark the truth becomes apparent. He has to go back to packing boxes and posting Christmas jumpers all over the place. This he does tirelessly and happily from September to December. But wait, there’s more: The father and son duo ALSO have a 9 to 5 job throughout the year. They own and run a print business and have done so since 1985. This is in the heart of the village they have called home for generations.

Have you seen an interesting business that found a gap in the market recently?
Please do share their details below and we’ll do our best to feature them in 2014.